Glycemic Index (GI) is a quality measurement of how carbohydrate foods release glucose into the bloodstream after they are eaten. The higher the Glycemic Index (GI) the quicker the release of glucose, and the more fattening these foods are. The lower the Glycemic Index (GI) the better these foods are for you because they are absorbed more slowly into the body and do not raise the blood glucose levels so much. They also keep you feeling fuller for longer. This idea has been refined into the idea of Glycemic Load (GL) which also takes into account how much you eat at a time. 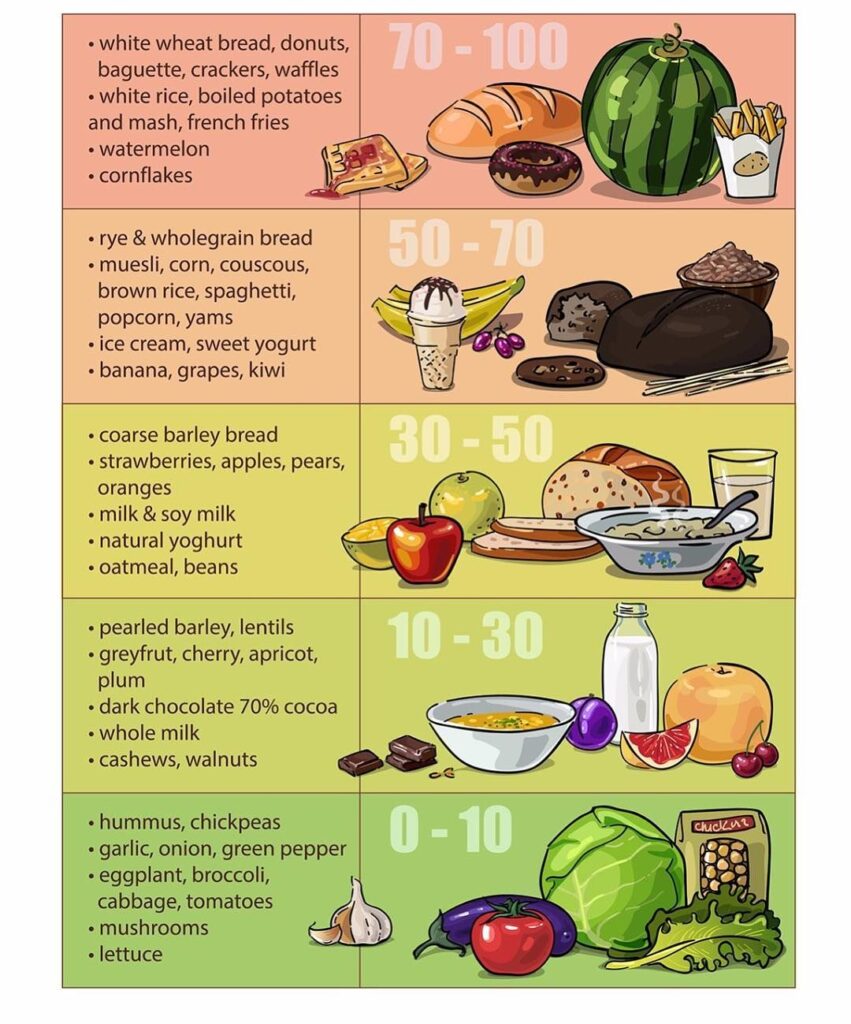 What is Glycemic Index?

Glycemic Index (GI) is a measure of how much a carbohydrate food raises your blood glucose level after it is eaten. Only carbohydrates do this, because even though proteins and fats can be turned into glucose they don’t do this as soon as they are absorbed, and they do it in a way that doesn’t raise blood glucose levels.

The weight of this food can be quite different, so this could be 50g of glucose or 667g of carrots, which is about eight medium carrots each containing about 6g of available carbohydrate.

Foods with a high Glycemic Index (GI) are considered bad for you, as they raise your blood glucose quickly, which is bad for your health, and the same number of calories eaten will put on more weight.

Comparing Glycemic Index figures, however, can be misleading. Chocolate has a GI of 49, and carrots of 47, which are almost the same. However chocolate has about 50% available carbohydrates.

So we are saying that eating 3oz of chocolate has the same effect on blood sugar as eating 8 medium carrots. Now I don’t know about you, but I find that eating part of a chocolate bar very easy to do, whereas eating eight carrots is more than I can ever manage!

This problem has been solved by the idea of Glycemic Load (GL) which looks at not only how much glucose appears in your blood but also the size of the portion that you will eat.

Why Is Blood Glucose A Problem?

A rise in glucose level in your blood triggers your body to produce insulin to remove it and store it in your body, and this is first stored as glycogen in the liver, which is the body’s immediate store of glucose, which is released during sudden exertion or stress, in the fight or flight response.

However, a rush of glucose also tends to store more fat in the body, and lead to an increase in weight, both directly, and also due to the fact that you soon become hungry again because the body becomes so concerned to remove the glucose quickly that it overshoots and leaves you feeling hungry due to a low blood glucose level.

Low GI foods are much better for you, as they release glucose into the blood slowly so that the body can handle this efficiently. They are also more satisfying because they keep you from getting hungry for longer.

The Glycemic Index (GI) shows that there is much more to carbohydrates than their calorie value and that we should all aim to eat more low GI carbohydrates in our diet to help our body work efficiently.

Diabetics should always eat low GI foods in their normal diet, as people with diabetes can not handle the glucose in their blood properly anyway.

FUE- All You Need To Know

WEIGHT LOSS AT END OF PREGNANCY