Difference between Baldness or hair loss

Firstly, if we take a look at what actually is baldness, then it basically refers to the loss of hair or to the absence of hair. If we talk about the general term that specific term that refers to the hair loss or baldness, then it is known as alopecia. Further, another important aspect about this alopecia is that it does not take place only on the scalp, rather it can happen anywhere on the body where hair is usually present. So, this baldness or hair loss can take place anywhere on the body but indeed it is most common and noticeable as well when it comes to the hair of the scalp.

Now, referring to the baldness or alopecia, then it can happen due to different reasons. If we consider the most common reasons that result in the hair loss, then these include the factor of aging, hormonal changes, some specific illness, genetics or even the use of some medications such as chemotherapy. So, all of these can result in baldness.

Another important aspect about hair loss is that although we observe that mostly men suffer from this condition, but that is actually not the case. This alopecia or baldness is also an issue for women as well. So, this condition is not limited to men only.

This patterned loss of hair in men basically affects the front as well as the top of the hair that is present on the scalp. Further, it can happen in a number of ways such as a receding hairline at the front, hair loss at the crown or it can even be the combination of these both. So, this thinning of hair at the scalp of a men that happens in a much-patterned way or manner is referred to as the male pattern baldness.

Another important aspect about this male pattern baldness is that it is actually classified as a non-scarring loss of hair. If we take into consideration the usual and most frequently observed male pattern hair loss or baldness, then it usually begins above the templates or the vertex of the scalp.

So, we can indeed say that it is actually the beginning of this hair loss process and later on, in this patterned baldness, slight amount of hair is left at the sides of the scalp and the back side of the head. This is the usual form of hair loss in men that is actually patterned. 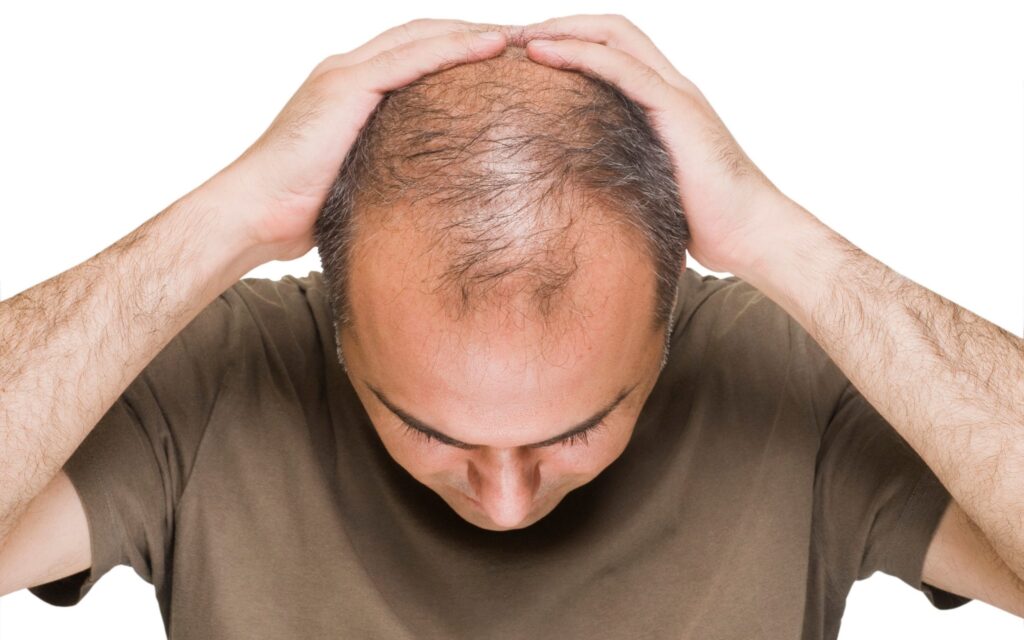 Now, if we discuss about some of the causes of the male pattern baldness, then what I would say is that these actually vary from person to person. This specific type of baldness that occurs in a patterned manner usually results because of some hormonal unbalance or changes.

When the hormone levels in the body change or are disturbed, then this situation can lead to androgenetic alopecia or the pattern baldness in male. Further, there are other related factors as well that may also lead to loss of hair in a pattern such as some kind of nutritional deficiency or even a psychological condition as well. So, we will consider the main causes of this patterned baldness in men.

The three most important factors or aspects that are concerned with this pattern baldness that is also known as the androgenetic alopecia include age, hormones and genetics. These are actually considered to be the main factors that play a vital role in the baldness of men that occurs in a pattern.

For instance, the age of the individual plays an important role in the baldness. As an individual ages, then the hair follicles do not remain strong and the hair begins to shed or fall. Similarly, if we consider the genetic aspect of the alopecia, then if an individual has a family history of baldness, then he is more likely to go through this same condition. So, it also somehow linked genetically as well. So, we can say that these genetic factors also affect the likelihood of hair loss.

Another important aspect that is widely considered to be the cause of male pattern baldness is the hormonal unbalance. If the hormonal balance is disturbed, then this can also lead to patterned baldness. Actually, the level of hormones in the body keeps changing as time passes. The hormones in the body change with the passage of time and it somehow affects the baldness. So, it is also an important cause that leads to patterned baldness especially in men.

So, based on the above discussion, we can conclude that the male pattern baldness that is also referred to as the androgenetic alopecia, it basically occurs because of some disturbances in the levels of hormones in the body. Further, it can also be caused due to increased age or even genetics. So, these are the factors that are considered to be the cause of the pattern baldness that men suffer from.

Katy Perry is Pregnant: What You Need to Know